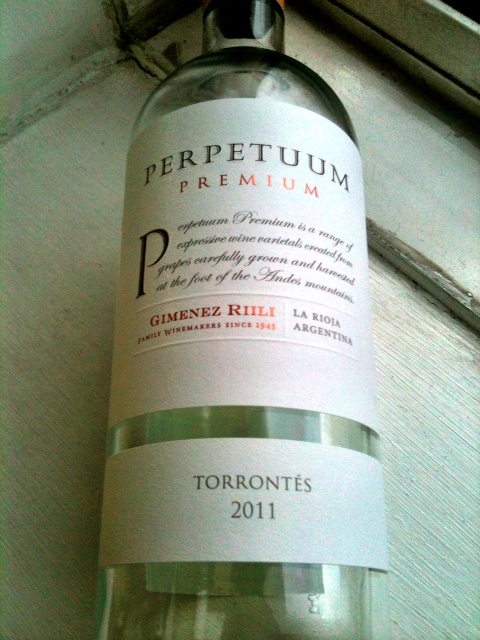 The word instantly conjures up deep, oaky red wines from Spain. But there is another Rioja. Actually, it’s called La Rioja, a small distinction but one nonetheless. The Rioja in Spain is also officially called La Rioja but here in the UK, it’s rarely used.

The La Rioja I’m referring to today is thousands of miles away in the western desert lands of Argentina. As was common practice when the New World was being discovered and named, the homesick immigrants named their new home after their old one, which is how La Rioja, a province of Argentina, came to be named. Spain did take the Argentine La Rioja to court to prevent them from using the name but the case was settled by an Argentine court. They ruled in favour of the Argentine Rioja, mostly because the wines of Spanish Rioja are made from Tempranillo and the majority of Argentine Rioja is made from the white grape Torrontes.

Which brings me to today’s wine, a Torrontes from the producer Gimenez Riili. Torrontes was erroneously thought for many years to a descendant of Spanish Torrontes but that has now found to be untrue. It’s now classified as a  uniquely South American variety. The Perpetuum Premuim 2011 Torrontes is a wonderful example of what can be done with this grape.

In the past, Torrontes often had an overly perfumed aroma, almost cloying with the same over the top flavours on the palate. The Perpetuum is no such thing. Aromatic but not overpowering, the nose is full of green apples, melon and grapefruits. On the palate, it is very refreshing, with loads of melons and fresh green apple flavours,  finishing on a grapefruit note.

This is a great wine to have as an aperitif or roasted or pan fried white fish. The Perpetuum Premuim 2011 Torrontes is available from Cupari Wines and costs £11.45.

I'm an American ex-pat who is fascinated by wine. Previous to my arrival in London, I had done a sommelier course in Buenos Aires, Argentina so I knew I wanted to be in the wine trade but where to start? I started where so many people in the UK wine trade start, Oddbins. I was fortunate in that Oddbins back then had a great wine education partnership with the Wine and Spirit Educational Trust and I was able take the WSET courses. I currently have the WSET Advanced Certificate as well as holding a UK personal alcohol license. Another advantage to working at Oddbins was that I had access to all the wine trade shows. Imagine, being able to go and try as many wines as you could in one day! Whew! I have to admit, I didn't do much spitting back then and the next day, I was wishing I had at least taken better notes. I started looking around on the web for blogs that covered the London wine scene and found there were none. Well, none that appealed to me. None that were a mix of trade and consumer views and opinions. And none that really talked about what a great centre of wine this fabulous city of London is. So I rolled up my sleeves, bought a domain name and the rest, as they say, is The Winesleuth history. The Winesleuth Website - Follow The Winesleuth on Twitter